DPP were appointed by Southampton Estates after they had received initially negative advice from the local planning authority about the prospects for the site. DPP had recently secured consent on a neighbouring site for the tallest hotel in the city, overcoming significant initial design and political opposition.

The redevelopment of the vacant Debenhams site comprises 614 residential build-to-rent units as well as ground floor commercial uses. The scheme extended to 17 storeys, making it amongst the highest in the city whilst being located adjacent to Grade II* Listed parks.

DPP developed a planning strategy for the site and re-positioned the pre-application submission based on a design team which could address the concerns which had been raised. Utilising our relationship with senior planning, transport and design officers we were able to adjust the scheme to address concerns whilst balancing the viability of the proposals.

DPP have worked closely with the design team and officers at the LPA to reach planning approval. Initial concerns about the scale of development and public realm were addressed by DPP working closely with the project architect and senior officers. Crucially, DPP balanced these concerns with the viability of the proposals. 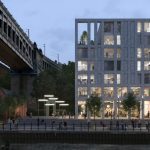