Salford Central is a massive masterplan-led regeneration scheme by English Cities Fund (the Fund), which DPP has provided strategic planning advice on since 2006. Salford Central is a 17-hectare city centre regeneration site providing some 3.3 million sq.ft. office, commercial, retail and residential floor space which includes 1,400 apartments and townhouses and two hotels across 30 buildings.

DPP has been instrumental in working with the Fund, Salford City Council and a range of partners in evolving the original Vision in 2006 into a viable and deliverable planning permission which has seen by 2018 1.4 million sq.ft. constructed and over 700 homes built within the city centre.

Key milestones reached include the adoption of the Planning Statement SPD and Development Framework in 2008 and 2009 respectively, the submission and approval of the main hybrid planning application and Environmental Statement in 2010 led by DPP, and the successful Compulsory Purchase Order process in 2011.

Since 2011, DPP has been retained as Planning Consultant on no fewer than 19 separate commercial and residential buildings, and in 2016 secured a comprehensive amendment to the masterplan to further increase the scale including outline consent for a 33-storey residential tower.

Planned as ‘Salford Central’ the masterplan is evolving into distinct city neighbourhoods of New Bailey, Slate Wharf and the award-winning Timekeeper’s Square. DPP remains engaged by the Fund in further commercial and residential developments in the area. 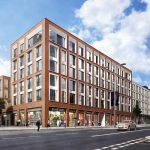