DPP played a major role in securing outline consent for a major urban extension in Cornwall, on behalf of Inox Group and Henry Boot Developments.

The ‘West Langarth proposals’ include the provision of a 120,000 sq.ft. district centre, 130 residential units, sports pitches and community building. Crucially, the plans provide the funding necessary to build ‘The Stadium for Cornwall’, a 10,000 capacity multi-sport stadium which will become the home of the Cornish Pirates Rugby Club.

At the outset of the proposals, DPP introduced the joint venture partners to one another enabling the project to proceed. DPP then provided retail, economic and enabling development advice on the proposals, producing a Retail Impact Assessment, Enabling Development Statement as well as a Community Benefit Statement.

DPP led discussions with the Council and their consultants on the impact of the proposals on Truro City Centre as well as agreeing the principle of enabling development with the Council together with the resultant economic benefits for Truro and Cornwall. The community benefits resulting from the proposals secured the backing of the Prime Minister and Secretary of State for Culture, Media and Sport and resulted in approval despite the site being out-of-town and raising retail impact concerns.

“This exciting project required planning policy to be balanced against community benefit. DPP lead this debate and we are delighted that Members supported our view that the impact of the proposals was far outweighed by the once-in-a-lifetime opportunity that the proposals offered.” 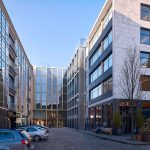