Planning Consent for the development of a high density, residential led mixed use scheme on the site of an abandoned former residential development site at Chafford Hundred. The revised scheme secured a significant uplift in density alongside provision for a new doctors surgery and neighbourhood retail units. The uplift in density and associated highways issues were contentious however the scheme ultimately secured a resolution to grant consent from Thurrock Council.

DPP project managed the application and organised meetings with local community representatives and ward councillors to steer the application through to a successful outcome.

Despite significant local objection, DPP steered the application through to a successful outcome. The scheme should be on site in 2018. 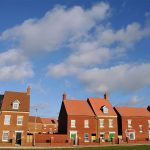